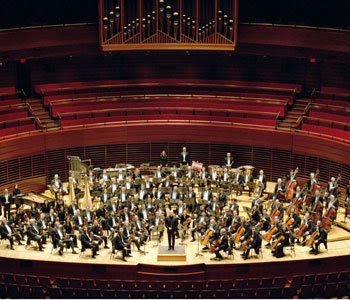 A couple of weeks ago, I wrote up a Stanford case on the San Francisco Symphony for my Nonprofits class. The project was timely, given the recent release of the controversial Flanagan report (pdf) commissioned by the Mellon Foundation that studied the economic environment of symphony orchestras. The Flanagan report has gotten a lot of flak in the corners of the blogosphere that I regularly read, some of it unjustified in my opinion. The report makes reference to Baumol’s cost disease, an economic term that originated with William Baumol and William Bowen’s seminal 1966 book Performing Arts: The Economic Dilemma. Baumol and Bowen argued that unlike some sectors of the economy, such as manufacturing, inherently labor-intensive industries such as the performing arts do not experience significant productivity gains with the introduction of new technologies. In other words, it takes no fewer musicians no less time to perform a Mozart string quartet today than it did in 1791. Yet organizations that employ workers in those industries must compete in the overall labor market with companies that do enjoy these productivity gains and can thus pay workers more. (Indeed, a commonly heard argument for the need to pay musicians in top symphony orchestras six-figure salaries is that “that’s what highly trained professionals in other fields earn.”) As a result, over time a firm suffering from Baumol’s cost disease will have higher labor costs relative to productivity, forcing it to raise prices for essentially the same product. This is particularly an issue for the performing arts and other labor-intensive fields in which revenue generation is difficult anyway, which includes most of the kinds of services provided by government such as education (this is one reason why tuition at private colleges has risen far faster than inflation, for example). One implication of this is that as a society gets wealthier, we can’t rely on that wealth to be distributed proportionately to these labor-intensive, revenue-poor industries through market mechanisms; it can only be accomplished on a large scale through voluntary donations or increasing the tax base.

The Flanagan report confirms that labor costs at the nation’s top symphony orchestras have, indeed, risen faster than earned income, and this has some people upset. They seem to think that the report is a Chicken Little doomsday speech pushed by a cadre of orchestra managers in a conspiracy to build a public case for breaking the musicians’ union. While I can’t speak for the motivations behind the report’s origin, the report itself doesn’t say anything of the sort. On the contrary, it states on page 87 that,

So orchestras (or at least the 63 relatively wealthy ones that were a part of the study) have successfully compensated for their increased labor costs by a combination of raising prices and seeking more donations—exactly what Baumol and Bowen’s model predicts. Now, there is nothing inherently wrong with raised prices and more donations, assuming the market can bear it. And when combined with increased price discrimination, such as in the case of college financial aid programs, the social effects can be quite positive as access is increased rather than limited. However, an increasing reliance on contributed rather than earned income still feels scary, because contributed income just seems less stable. How can we count on people to just keep giving money away, against all rational instinct? Although orchestras have managed to stay afloat these past few decades, with some experiencing genuine financial success, I don’t see these issues going away anytime soon. The entire model is extremely dependent on the orchestra’s ability to find new donors and convince existing donors to give more and more for essentially the same experience. If the bottom were to suddenly drop out of that revenue stream, orchestras would find themselves incredibly exposed.

Now, what does this have to do with newspapers? Well, in addition to my Nonprofits class I’ve also been taking a course called Media Economics and Financing Journalism, taught by a member of the family that used to own the Boston Globe. As the semester has progressed, I’ve slowly become convinced that newspapers are in almost the exact same boat as symphony orchestras. They also face a Baumol effect in that technology advances have had limited benefits for the efficiency of quality original reporting. Furthermore, the most profitable sections of the newspaper (the sports, travel, and health pages) and the section that provides the most public good (the news division) are not the same. Our guest speaker in class yesterday even remarked that the demographics of his newspaper subscribers and subscribers to the local orchestra are virtually identical: aging, upper-income, and mostly white. However, unlike orchestras, most newspapers have had to rely solely on earned income to compensate for their rising labor costs—and so far, it’s not working. As a result, staff positions are being cut at print publications all around the country, with critics (music, dance, theater, and now even film) some of the first to go. After all, why should a paper pay someone to go see a movie and write about it when so many are willing to do just that for free? Even the educational environment in the two fields invite parallels, with both conservatories and journalism schools churning out new graduates at record rates, giving them the highest quality training for jobs that simply don’t exist.

If we can agree that journalism does provide an indispensable public good, in the form of in-depth, factual information not available anywhere else, I can’t help but see it gravitating toward a contributed income model in the coming years. No matter what steps the current industry giants take to shore up revenue streams, whether it be the Washington Post buying Kaplan or the New York Times Co. grabbing a piece of New England Sports Ventures, their core journalism operations will remain loss leaders, and thus vulnerable to cost-cutting pressures. Absent a significant change in industry dynamics, I would not be surprised if nonprofit journalism models become more common in coming years.