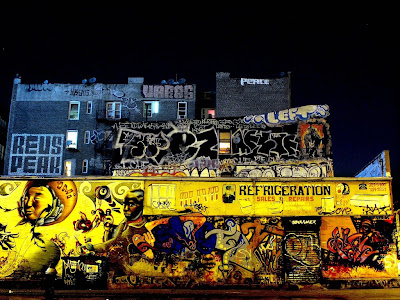 As part of my independent study on public policy and the arts, I’ve been reviewing a significant amount of literature on the potential of artists and arts organizations to serve a revitalization role in so-called “transitional” neighborhoods and communities. While many studies show a clear relationship between the presence and density of nonprofit arts organizations and various indicators such as property values, population growth, and poverty decline, the directionality of the causal link has not yet been firmly established. Furthermore, even if it can be determined that the arts have this impact on communities, the abovementioned positive results tend to be confounded by troubling side effects of neighborhood growth, including increased income inequality, racial and ethnic tensions, and in some cases physical displacement. The extent to which these negative impacts can be mitigated remains an open question for those working in creative community development.

For many years, the standard approach to creative community development was, essentially, to stick a giant performing arts center in the middle of downtown to draw tourists and suburbanites (and their dollars) into the city. One of the first examplars of this strategy was New York City’s Lincoln Center, for which Robert Moses cleared a 13-acre city “superblock” that had housed 1700 families and 380 businesses. If anything, the trend has only accelerated, with major performing arts centers having debuted in places like Philadelphia, Omaha, Nashville, Austin, Dallas, Madison, and Miami in the past decade, and another one in Las Vegas on the way.

Unfortunately, I haven’t come across much empirical analysis of the effectiveness of these cultural institutions on revitalization of their surrounding areas. The evidence that does exist appears to be mixed. Though Lincoln Center can arguably be viewed as a success story, due to the transformation of its neighborhood in the 47 years since it opened, development by way of these “cultural palaces” suffers from significant downsides. For one thing, without further thought and investment toward guiding the surrounding neighborhood in a positive direction, these beautiful monuments to culture can turn into imposing, inaccessible behemoth structures that cater only to the car-driving rich. Since lively pedestrian traffic is the lifeblood of cultural districts, such a result signifies a missed opportunity to bring the investment to its full potential. Kansas City is trying a more comprehensive approach, pouring well over a billion dollars into downtown redevelopment this decade. The anchor developments, which include the Power & Light District (operated by the people behind Baltimore’s Inner Harbor complex) and the $413 million Kaufmann Center for the Performing Arts, are augmented by a number of other cultural facilities and commercial tenants. Yet this strategy isn’t perfect either; the tight, top-down control of the Power & Light tenant mix has resulted in what some critics term a “sameness” that saps some of the fun out of the place due to overcommercialization.

One “cultural palace” that seems to have worked out rather well is North Adams’s Massachusetts Museum of Contemporary Art, or MASS MoCA. Backed by a $35 million investment from the state, the well-regarded museum had a dramatic effect on its surrounding community in just a few short years. In a 2006 study entitled Culture and Revitalization: The Economic Effects of MASS MoCA on Its Community, economist Stephen C. Sheppard and colleagues showed that in the three years following the facility’s opening the city saw significantly increased property values (within 1.7km of the museum), hotel tax receipts, total employment, and average salary per employee along with modest improvements in the number of small businesses in the city. It’s possible that, as a smaller city in a rural part of Massachusetts, North Adams was a more appropriate fit for a top-down investment strategy than most.

Rather than pouring hundreds of millions of dollars into a few city blocks, some culture theorists instead advocate the cultivation of so-called “natural” cultural districts. These organically-occurring neighborhood hotspots for cultural activity are associated with numerous positive trends in their surrounding communities, as impressively documented by Social Impact of the Arts Project’s Mark Stern and Susan Seifert. In their 2007 brief on the subject, Stern and Seifert showed that block groups in the metropolitan Philadelphia area in the top quartile of cultural provider density were four times as likely as block groups in the bottom quartile to see their population increase and poverty decline during the 1990s. By defining a “cultural asset index” based on four measures of artistic activity in a neighborhood, the authors additionally demonstrated that 83% of the neighborhoods that showed significant improvement in real estate markets from 2001-2003 also scored highly on the index.

Supporting “natural” cultural districts will tend to take the form of subsidizing artists more so than high-profile arts organizations. One of the most common methods of doing this is by establishing live/work spaces for artists, of the kind that Artspace is known for developing. The problem with these “natural” cultural districts is that the gentrification often associated with them can be hard to rein in, especially in already-hot urban real estate markets. The rapid development of New York City neighborhoods, particularly Williamsburg, has forced the displacement of longtime residents and more recent artist immigrants alike. In addition, an influx of artists in a neighborhood does not necessarily bode well for relations between the artists and existing residents. A study examining two developing neighborhoods in Oakland, CA looked closely at these issues. The 23rd St. and Telegraph Avenue district suffers from both rapid gentrification and a lack of integration between the neighborhood’s old and new residents. Meanwhile, in the nearby Village Bottoms neighborhood, a community organizer named Marcel Diallo is trying to create a “Black Cultural District” by buying up properties and making them available to African-American “founding buyers” at a discount, thus heading off the problem of displacement. Can organic, bottom-up developments like these really be guided intentionally toward positive ends? To the extent that successful examples may exist, they have not yet shown up in my review of the literature.

Another tension arises when considering who should benefit most from creative community development. Two studies, Mapping Cultural Participation in Chicago and the Philadelphia and Camden Cultural Participation Benchmark Project, focused strong attention on some of the poorest neighborhoods in their respective cities, neighborhoods nearly bereft of cultural providers and with hardly any local participation in the city’s flagship cultural institutions. Yet the researchers found that while the symphony, art museum, and repertory theater have trouble reaching these residents, the few organizations that actually conducted activities or were based in those neighborhoods were much more likely to engage them, especially if their programming was culturally specific. To put this in context, remember that many mainstream cultural institutions worry themselves sick about reaching “diverse audiences”—it’s like the Holy Grail to them. This research suggests that they aren’t likely to get very far so long as they’re located in hoity-toity neighborhoods and showcase predominantly dead white male artists.

That information is all well and good to know, but can it be translated into action? Artists do seem to have an at times unfortunate tendency to want to cluster around people who are like themselves—alike, certainly, in terms of artistic focus, but also in terms of educational background and, seemingly, racial and ethnic heritage. This clustering means that even “natural” cultural districts, if supported in place, are going to tend to privilege neighborhoods that are relatively well-off compared to the poorest districts in the city. For this reason, I wonder if it is realistic to hope that truly neglected communities can be “saved” through the arts, or at least the arts alone. Indeed, economic development goals for the arts would seem to be in some conflict with community revitalization goals, in that an economic development strategy aimed at wealthy suburbanites and tourists will tend to build on the already-strong assets of the city rather than invest in neighborhoods that have a long way to go.

Though the arts’ value-generating and revitalizing effects have been ably documented in several instances, there does not appear to be a clear formula for capturing the benefits of arts-based community development while leaving the drawbacks behind. Nevertheless, in light of the materials I’ve read and the conversations I’ve had to date, I do have a few concluding thoughts and recommendations: