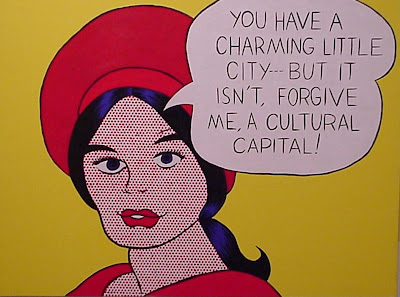 On Saturday I had the privilege of attending Saving Our Cultural Capital: The Challenges Facing Independent Artists and Venues in Manhattan, an event co-sponsored by The Tank, Fractured Atlas, and the New School for Management and Urban Policy. This mini-conference focused on the creative sector’s economic challenges and contributions to urban life, something that I’ve studied quite a bit, and served as a nice warm-up to the National Performing Arts Convention this week. The afternoon opened with a speech by Scott Stringer, Manhattan Borough President. In introducing Stringer, The Tank’s co-director Justin Krebs told of how at the most recent State of the Borough address Stringer invited Sigourney Weaver (whose husband, Jim Simpson, founded the Flea Theater) to speak about the challenges faced by independent venues in New York City. Stringer lived up to his billing as an arts-friendly politician: he echoed the thoughts of many in the field by saying that people come to New York because it’s full of interesting people doing interesting things, not because they want to see a bunch of high-rise buildings that all look the same and have the same kinds of people in them. According to Stringer, the public sector needs to become as savvy as the private sector in the way it approaches sustainable development and affordable housing ends.

Stringer suggested three areas of focus for those seeking to facilitate a more amenable environment for artists in the city of New York. First, he encouraged those present to become activists on a local level, particularly through involvement in community boards. He said it takes surprisingly few people to make a positive difference in this way. Secondly, he asserted that there are thousands of properties owned by private developers that are currently vacant and sitting unused. Stringer proposed conducting an inventory of these spaces so that residents could be aware of them and so that pressure could be put on the owners to sell them or put them to use. Finally, Stringer urged artists to form coalitions with like-minded activist groups that may have shared interests and cut through generational and class barriers.

Ultimately, the themes of activism and alliance seemed to run most strongly through Stringer’s comments, and indeed throughout the afternoon’s events. Artists and arts groups may be feeling a financial pinch, but it’s not because there is no money to go around. Stringer revealed that the Industrial and Commercial Incentive Program (ICIP), which is up for renewal next month, currently gives out $409 million a year in tax breaks to businesses to prevent them from leaving the city. Shockingly, 86% of this money goes to big box retail such as the Toys ‘r Us store in Times Square ($2.4m). Hundreds of thousands of dollars are subsidizing gas stations, McDonald’s, Dunkin Donuts, and Burger Kings. Arts organizations get none of this money, despite being part of one of the most important industries in New York. And it’s because at the moment, artists’ interests (and in many ways the indirect interests of the community) are being run roughshod over by the interests of others who exercise their power more effectively. Stringer asked why it was that seniors, of all interest groups, seem to wield so much political influence; it is because they are exceptionally well organized and know the political process. Artists and their advocates will need to learn to defend their livelihood with similar passion in order to hope to have a say in determining the city’s priorities.

The second part of the event consisted of a panel discussion with Paul Nagle, Director of Communications and Cultural Policy for New York City Councilman Alan Gerson; Risa Shoup, Performing Arts Director of chashama; Arwen Lowbridge, Managing Director of Fractured Atlas; and Derek Denckla of the Propeller Group. Nagle opened by identifying four challenges standing in the way of effective change: facilitating communications between the for-profit and non-profit halves of the creative sector; understanding and respecting both the quantitative and qualitative contributions that the arts make to urban society; the cooptation of artists into a public and private conception of real estate that judges land values as the sole criterion of success; and encouraging more joint activism among artists with natural allies such as trade unions and environmental groups. He said that public officials need to think of the arts as diversifying their cities’ economic portfolios (in addition to the other benefits they bring), since they are not as dramatically affected by downturns in the stock market as other kinds of businesses. Lowbridge shared her observation that even within the membership pool of Fractured Atlas, artists seem to be operating within small circles without much contact outside of them. (I’ll add as an aside that my own experience matches that of Arwen’s: as someone who had peripheral contact with several musical circles when I was living in NYC, it was rather shocking how little communication there was between each network of, say, 15-40 people. Also, I almost never hung out with artists who were not musicians, and neither did my friends.) Shoup talked for a bit about her work at chashama, which involves matching artists and arts organizations with temporarily vacant spaces—a win for everyone, ideally. Interestingly, Shoup revealed that the private owners of the spaces receive no tax break for working with chashama and usually do not receive rent either—yet they participate anyway. That speaks to the strength of chashama’s common-sense proposition. (It also helps that its founder, Anita Durst, comes from a family that at one time owned 20% of the corporate real estate in Manhattan.) Finally, we heard from Derek Denckla, who has an exceptionally interesting arts, legal, and business background that includes a role in developing the space in which “Room for Creativity” was held in March. He explained that the zoning system currently used by New York City is actually based on a suburban model from Cleveland! He encouraged artists to look at developers through a less hostile lens but instead think about ways in which the interests of the two groups could be aligned. In particular, Denckla pointed out that artists tend to have a certain entrepreneurial mentality that is flush with vision—something that the corporate sector is often lacking (no matter what my business school friends might say). He also pointed out an organization called Where We Are Now which is attempting to serve as an organizing agent for arts and politics in NYC.

In the question and answer period, one of the panelists identified two initiatives that are close to coming to the table in Albany: a business tax incentive for small venues (capacity of 250 and under) to pay performing musicians at the prevailing wage; and a tax abatement for for-profit property owners to rent their space to nonprofits (presumably at a below-market rate). I think these are both fantastic ideas (with the caveat, of course, that the devil is in the details) and will try to find out more about these initiatives for you.

Overall, it was a nice event and one that provided much food for thought. Towards the end of the panel, Nagle quoted a favorite saying of ArtHome founder Esther Robinson that sums up the day and might as well be a motto for this blog given the name I chose: “Every time you make art, you create equity—and if you don’t capture that equity, someone else does.” Indeed.