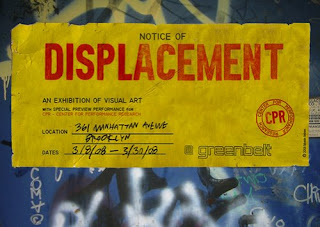 Last Thursday, I had the opportunity to attend Room for Creativity: A Community Roundtable on Real Estate Strategies in the Arts (pdf). The event was co-produced by the very smart people at Center for Performance Research (CPR) and Fractured Atlas, and took place at a new gallery space called Greenbelt. Greenbelt itself is something of a story here: it’s the first LEED-certified environmentally friendly building in Williamsburg, and its first-floor gallery space is creatively subsidized by the sale of condos on the upper floors. I actually had to sign a release form upon entry because the building is still technically a live construction site! Anyway, the space is gorgeous and already houses several sculpture and media works as part of the “Displacement @ Greenbelt” exhibition that concluded Sunday.

The panel was a varied group that included John Jasperse and Jonah Bokaer of CPR, Luis Garden Acosta of El Puente, Julie McKim (one of the curators of the gallery exhibit), Deborah Masters of the recently mass-evicted loft community at 475 Kent, Guy Buckles of Art Building, and Brad Lander of the Pratt Center for Community Development. The aptly-named Caron Atlas of Fractured Atlas moderated. The story of 475 Kent has been chronicled elsewhere, but suffice to say that for the city to evict 266 tenants on the coldest night of the year with 6 hours’ notice is, umm, less than helpful to maintaining good relations with a group of people who should be allies. Anyway, the major theme of the night seemed to be the artist as both victim and perpetrator of gentrification. McKim was the first to bring up the subject when discussing the works on display at the event, and several audience members gave their own perspectives as well. 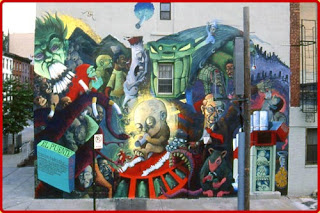 For me, the most powerful contribution on the subject came from Garden Acosta, whose El Puente is the granddaddy of the arts community in Williamsburg (having been around since 1982). Garden Acosta commented eloquently on the (primarily Latino) art that existed in the neighborhood long before the (primarily white) artist “pioneers” arrived in the neighborhood in the 1980s and 1990s. To some extent it is comparing apples to oranges (a local vs. nomadic population, for one), but he is unfortunately correct that too many self-styled artist immigrants assume that there was “nothing there” before they arrived. As a matter of fact, much of Williamsburg’s most recognizable public art was created by El Puente’s Muralistas initiative beginning in 1991! (For context, that was four years before the arrival of Momenta Art and five years before the opening of Galapagos.)

Though the discussion focused more on problems than solutions, several participants did share ideas of how to move forward. Much of what was shared fell into a general category of relationship-building: among artists themselves, between artists and other members of the local community, with other advocacy groups (particularly those focusing on low-income housing), with policymakers, with light industry, and with business interests (including real estate). More than one participant, interestingly, mentioned the symbiotic relationship that the arts have with traditional blue-collar work such as construction and manufacturing. The urge of artists to apply their creative instincts to their own spaces, as well as the explosion in environmentally-friendly building processes, point to the possibility of a renewal of ties between those sectors.

Following the panel, we watched several films about Williamsburg short and long, old and new. One of the more notable was “Traverse the Fantasy” by The Change You Want to See, which transposed current residents’ commentary on top of the computer-generated video mockup of the ideal Williamsburg produced by the city for potential developers. I was also interested to see the beginning of “Los Sures,” an hourlong documentary about Williamsburg’s Latino community from the 1980s. To be sure, the neighborhood was very different then.

This event couldn’t have come at a better time for me, as I plan on talking about Williamsburg extensively during my ORGEFF presentation on Wednesday. I was very glad to be there and look forward to future events.