(Individual artist week continues with the introduction, in March 2009, of the concept of an “artistic marketplace” – a parallel marketplace “in which the currency of trade is respect from one’s peers rather than the ability to draw a big-spending crowd.” This idea ended up serving as the intellectual foundation for a number of subsequent articles at Createquity and elsewhere, and this is probably one of articles that I’ve linked back most frequently over time. “What Do I Mean By An Artistic Marketplace?” lays out the importance of curation to the individual artist’s livelihood, and argues for the wisdom of treating the act of curation itself as a form of marketplace activity. -IDM) 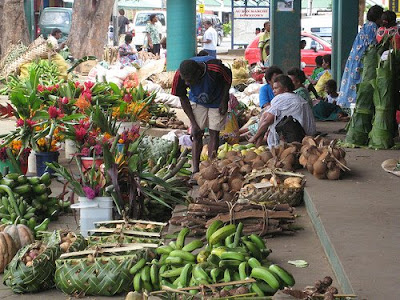 In a recent post here, I threw around this idea of an artistic marketplace, as distinct from the market itself. I had thought I came up with the idea in one of my Thoughts on Effective Philanthropy posts from last year, but perhaps not surprisingly, I discovered that Adam Forest Huttler had articulated it much more clearly than me in a response to that post:

The most important decision I ever made at Fractured Atlas was our late 2001 shift from a curatorial strategy to a wide open one. By accepting that I lacked the vision or wisdom to reliably identify the next Jackson Pollack or even Richard Foreman, I democratized our whole approach to supporting the arts community. The new goals were about leveling the playing field by providing resources and tools that reduced the likelihood that real talent would be squashed by bad luck or poor access to vital services. Ultimately Fractured Atlas helps our industry’s “market forces” function more effectively by limiting the often significant impact of non-artistic factors (e.g. healthcare, funding, technology).

Here’s what a functioning artistic marketplace doesn’t look like: in 2005, the heyday of my experimental rock band Capital M, I booked a total of nine gigs at well-known small clubs such as the Knitting Factory, the Bowery Poetry Club, and the Zeitgeist Gallery up in Boston. To give you a bit of context, my band has some serious firepower in its lineup, musicians who have played with the likes of the Bang on a Can All-Stars, Bruce Springsteen, and Yo-Yo Ma’s Silk Road Ensemble. These concerts included the release party for our debut CD, a CMJ Music Marathon concert, and the 21st Century Schizoid Music Festival, and included appearances with Elliott Sharp and Todd Reynolds among others.

Our revenue from these concerts averaged less than $65 a night. Take out the show at the Zeitgeist, which is misleading because we had to rent the space in order to play there, and the average is closer to $40. That’s $6.67 for each of the six members of the band. But wait! In order to prepare for these gigs, I had to rent rehearsal space at an average cost of $86 per show. So rehearsal expenses alone were enough to put the band underwater without subsidy, and that’s not even considering equipment, recording expenses, publicity, or anything else. In total, the band cost about $7,000 that year and took in less than $600 in concert revenues.

After 2005, I changed Capital M’s business model to one in which we played fewer concerts, but the concerts we did play included an annual World Premieres Extravaganza for which I conducted extensive fundraising. For the second World Premieres Extravaganza at Tonic in April 2007, I received grants from Meet The Composer and the Manhattan Community Arts Fund which enabled me to pay each band member a respectable fee of $300 and (thankfully) still break even. All that donor largesse, however, didn’t do much for Tonic; the venue closed forever less than two weeks later.

Our experience with this system is by no means unique. All presenters within the arts ecosystem, even nonprofit ones, must develop programming based on a blend of artistic considerations and market considerations. The problem is that some of the best art is, by its very nature, anti-market. Jazz guitarist Marc Ribot has written a must-read essay on the plight of small independent music venues in New York City, a number of which have failed or been forced to move in the last several years. In it, he diagnoses the problem:

”Do It Yourself” is a lovely idea, one which leaves its believers with a comforting sense of control over their destiny. the only problem is that when the “It” is running a business capable of treating musicians fairly and the “Yourself” is the musicians themselves, it doesn’t work, for the same reason that kibbutzes haven’t globally replaced private farming, food co-ops haven’t replaced supermarkets, housing co-ops haven’t (as their original proponents theorized) provided massive havens of low income housing and workers co-ops haven’t replaced private industry: Businesses need capital. People who work gigs for a living, by definition, don’t have it.

Without capital, venues either eventually fall back on the old strategies of musician exploitation, abandon new music priorities, fail or all three. If those venues are ‘artist run’, the only difference is that we get to exploit ourselves. Hooray for progress.

Ribot reveals that the reason jazz has survived at all in this country is largely thanks to subsidies from across the pond.

In truth, our belief that the market could fund new music was always as illusory; European touring, heavily state subsidized, has been the real economic motor of experimental jazz/new music for decades, the light at the end of the tunnel of months of scarce and/or poorly paid NYC gigs. […]

I’ve spent close to two months a year on tour in Europe since 1984, playing over 1,000 gigs. For years, I’ve asked presenters how their funding was structured. I was often surprised at the answers: even some of what I thought were private clubs were in fact administered by jazz or new music societies or co-operatives. The European gigs were almost always subsidized: usually by the city or state government completely donating the performance space itself.

Note the method of intervention here taken by European governments. Rather than directly subsidizing Ribot’s ensemble and those like it, they instead lowered the costs for the organizations that present the ensemble, enabling those organizations to pay Ribot a decent artist’s fee. This, to me, is a key element of a sane and sustainable artistic marketplace.

The basic elements of cultural production are the creator, the performer, the producer, and the presenter. In our current arts funding system, different public and private donors might be providing assistance at any and all points along this chain. It’s extremely haphazard, and it can lead to bizarre juxtapositions like the same musicians getting paid $600 one night at Merkin Hall and $6 the next night at Zebulon, or one composer receiving a $5,000 commission in connection with the premiere of a new piece at a concert and another composer receiving zilch for another premiere at the same concert.

Wouldn’t it be simpler if all performers could have a reasonable expectation of getting paid by virtue of being booked at a venue that programmed noncommercial work? So that the only thing the ensemble would have to worry about is proving their artistic worth and relevance to the curator, rather than whether they can afford to go deeper into debt in hopes of greater exposure? For this to happen, arts funders would need to focus their resources on lowering the cost of cultural production and distribution for everybody, rather than trying to pick and choose who gets the spoils. In other words, they would outsource the curatorial role to those who do it for a living: bookers, artistic personnel, and artistic directors. It’s almost like giving a mini-regranting program to each presenter, and endowing them with the autonomy to dole out the funds as they see fit.

In the context of my writing on philanthropy, the idea of enabling a self-functioning and self-regulating artistic marketplace has one important implication: namely, that funders would not worry so much about the quality of the art that they’re funding. That sounds counterintuitive and scary to a lot of donors, but if you think about it it makes some sense. Funders are not necessarily in the best position to judge artistic quality, relative to other people who might be able to do the same. Unless they’re ready to commit to sending staff to performances every night, listening to every CD and watching every video that comes in through the door whether solicited or not, and generally pounding the pavement scouting new talent, they’re not going to be in that position. (This is why many already partially outsource this expertise by regranting funds to discipline-specific service organizations and/or convening rotating peer review panels to make the decisions.) Most importantly, arts funders wield a disproportionate amount of power due to the resources they hold, yet the aesthetic tastes of their staff, no matter how well-informed, are no less subjective than anyone else’s.

By funding artistic systems instead of artistic producers, funders can distribute those resources to a much broader network of informed decision-makers, each of whom will make their own judgments about the artistic merit of individual players on the scene. Their aggregated decisions, awarding this date to that band and that residency to this performer and so on, collectively represent the artistic marketplace of which I speak: a marketplace in which the currency of trade is respect from one’s peers rather than the ability to draw a big-spending crowd.

I’ll end with this quote from the Marc Ribot essay that I linked to earlier. I think it nicely sums up the importance and potential of thinking about the arts in this way.

The idea behind European public arts subsidies, the reason why NYC jazz/new music artists for at least the last 40 years have played Paris, Cologne and Zurich many more times than they’ve played Hartford (and how many have ever played Des Moines?) is a doctrine called “the European cultural exception”, a set of government policies based on the concept that, even within a market economy, art/culture is to be treated differently from other commodities.

That enough Europeans have chosen to value this social benefit, to codify these values into law and fund the laws into being…is why about half the music I care about exists.