In January, in response to a flood of protests from the Internet community, both houses of Congress indefinitely postponed voting on the Stop Online Piracy Act (SOPA) and the PROTECT-IP Act (PIPA).  As many of you are aware, the contents of these controversial bills–which sought to regulate Internet content in the name of fighting piracy–are at least as important as they way they were stopped, by an enormous Internet protest that took the form of major website blackouts, activism on social networks, and petitions sent to representatives.  Many observers, including Jonathan Wiseman of the New York Times, have commented that this outpouring was part of a larger war between old and new economies, and thus also old and new ways of wielding political power.  With over 70 members of Congress coming out against SOPA/PIPA after the Internet backlash, it’s clear that the new economy won this battle. 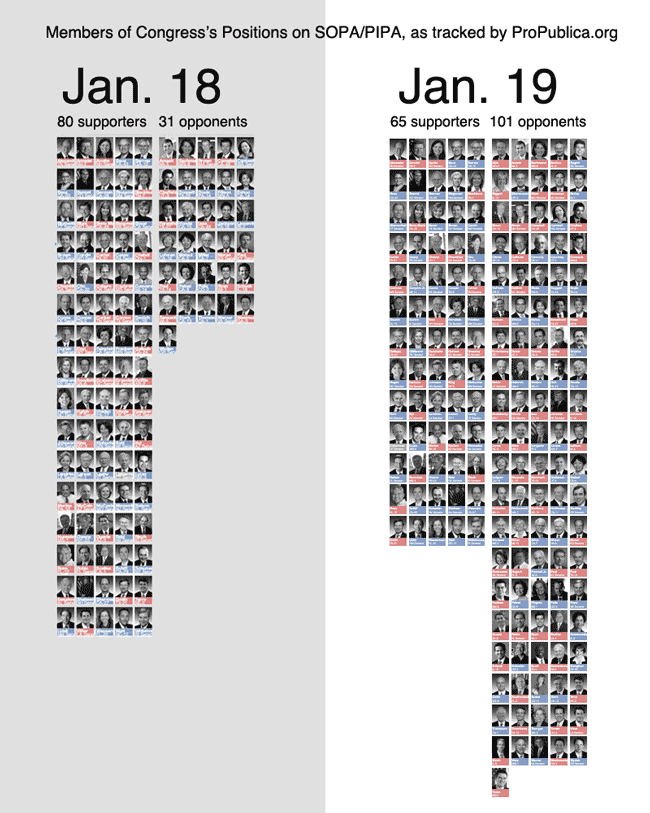 Arts organizations, in general, have divided themselves along similar lines in their stance on SOPA and PIPA.  Supporters include several major players, mostly entertainment industry unions and associations with a great deal of traditional lobbying power; opposition includes a wider range of arts and culture organizations, including Fractured Atlas, McSweeney’s, Dance/USA, and the National Alliance for Media Arts and Culture.  And just as corporate giants like Viacom have been dealt a surprising loss, so too have groups like the Actors’ Equity Association that represent artists on a national stage.

The fact that we are witnessing a dilution of the lobbying power of arts unions, and thus a loss of a certain amount of political pull for the arts writ large, may seem troubling.  It shouldn’t–Internet activism, like the Occupy Wall Street movement, is uniquely decentralized, placing a high premium on visibility, and thus precisely the kinds of creative protest that artists excel at. The campaign by the culture-jamming publication Adbusters that launched the Occupy Wall Street movement is only one of many examples of artists effectively using decentralized media to get their message across, whether by glitterbombing anti-gay public figures, or returning weighted business reply mail envelopes to drive up the costs to banks.

Artists and arts organizations can continue to build on these efforts by recognizing that the decentralized power of the Internet means that a great deal of our strength lies in the ability to spread, and shape, the messages produced by others.  Ideas and instructions for how to produce viral videos and memes abound, but anyone who has attempted to produce one knows even the most interesting pieces need a great deal of luck to catch fire online (though that doesn’t mean we should stop trying).  Still, we may be better served by recognizing even highly politicized pieces like glitterbombing as the efforts of artists and lending our support through social networks and other media.  In this way, we can further link the vibrancy of Internet culture—which also tends to be virulently anti-censorship—to that of the arts.  After all, as Occupy Wall Street shows us, the power of decentralization grows as a function of inclusiveness and openness.  The more voices we recognize and empower, the more we are amplified as a group.