Fox News’s misleading attacks on the NEA, coming as they did just prior to the confirmation of a new Chairman for the organization, seem to be raising a lot of hackles in the arts world. Is the concern justified? Barry Hessenius thinks so, and warns that things might get a lot worse as conservatives gear up for a new culture war. Barry also links to a report that I meant to cite in last week’s essay, but forgot: 51 Republican Congressmen signed a letter to NEA Acting Chair Patrice Walker Powell demanding that the money from the “offending” grants be returned. The Congressman who spearheaded the effort, Cliff Stearns (R-FL), learned about the grants from (surprise!) Fox News, who contacted his office seeking comment on their original story. (Stearns is known as a reliable NEA basher, according to the article.) Predictably, the letter reflects all of the worst distortions and errors in the article, claiming that “much of this taxpayer money is being used to fund art projects that many Americans find offensive” despite only being able to name the same three grants cited in the Fox article that collectively total 0.2% of the NEA’s stimulus money (and 13 millionths of one percent of the stimulus bill as a whole). But don’t worry, friends — as Stearns says, “our intent is not to censor artistic freedom.” Barry certainly agrees; here’s what he thinks the real intent is:

I still believe those who make these kinds of baseless attacks are not at all interested in the art the organizations it seeks to attack are, or are not, involved with. I don’t think it was any coincidence in the first Cultural Wars that almost brought down the NEA that the “issue” in most of the attacks was gay related – Mapplethorpe nudes, a gay film festival in Texas, the production of the play Angels Over America in North Carolina – because what the attacks were really about wasn’t taxpayer money or art or pornography, they were about fund raising for the evangelical wing of the Republican party – and nothing has ever been more successful in raising funds from that sector than the specter of gay rights. When the coffers of the right wing are running dry, the time-tested solution is to trot out the threat of gays having equal rights – and it has, for a long time, worked very well. Couple the gay rights issue with the accusation that taxpayer money is spent on anti-American pornography – and, well, the potential for a fund raising bonanza is just too tempting for the right wing to ignore. A new cultural war is an easy way to grab headlines, raise the level of visceral response, and rally their troops.

Unbelievably (or maybe all too believably), Fox News’s clownishness about the NEA doesn’t stop with their execrable July 30 article. Poking around as I am wont to do on political websites, I found this gem from News Corpse, an entire website dedicated to exposing Fox’s liberal relationship with the truth: The National Endowment for the Arts??? Are they really mobilizing against town hall protesters? Were those artists who were crashing community centers and public halls where Tea Baggers were fighting to keep the insurance companies between you and your doctor?

The problem with this picture is that Carpenter’s article [linked to from the image] says nothing about the National Endowment for the Arts whose logo is prominently displayed in the upper-right corner. There is a passage that mentions the NEA, but she is referring to the National Education Association. Rather than ascertain the facts, Fox Nation saw an acronym that could just as well have belonged to a favorite foe of theirs, so they giddily inserted the wrong logo into their graphic.

(Emphasis mine.) The graphic is off the front page now, but in case you suspect News Corpse (an admittedly partisan website) just made that graphic up, I went to the Fox Nation website myself before they took it down and took the following screen cap for posterity: 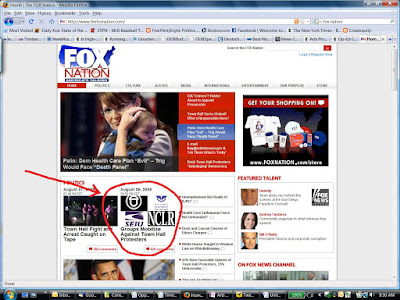 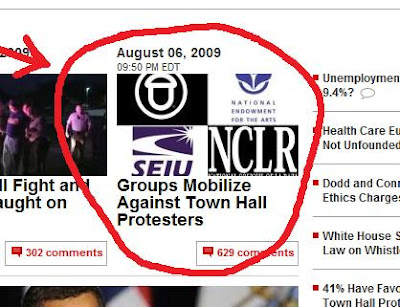 Busted! Reminds me of Fox’s practice of “accidentally” labeling Republicans as Democrats as soon as they get caught in some sex scandal or other.

This is all, of course, very entertaining, but in the rest of the arts world life goes on: