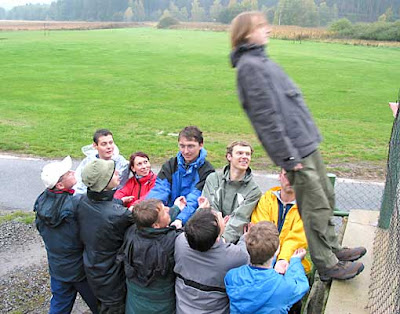 This week, the Doris Duke Charitable Foundation announced that, in light of the recession, it is open to renegotiating terms of previous grants in order to allow arts organizations to spend the funds on more immediate needs. At around the same time, the Gates Foundation was releasing a statement by CEO Jeff Raikes saying that the behemoth grantmaker needs to create a “culture of listening” to its grantees. I think these are both positive developments and a step toward promoting more positive, open communications in the field.

One of the biggest lessons I’ve taken away from my study of philanthropy over the past two years is that poor communication between funders and grantees can create a lot of problems. My class on philanthropic foundations demonstrated the point rather vividly by showcasing one of those horror stories you sometimes hear about: a high-profile funder with big pockets encourages the president of a university to develop a new program for curriculum reform; the dean submits a proposal despite reservations about the program’s feasibility; sure enough, the program, while funded for a pilot round, is essentially a failure; but in order to preserve the relationship with the funder, the program is spun in the report to seem like a success; therefore, the program is funded again and the foundation’s board members pat themselves on the back for a job well done. The names were fictionalized in the materials we read, but anyone who has been in the nonprofit trenches knows that situations like this happen far too often.

What’s really going on here is that each of the parties has a strong incentive to delude themselves into thinking that a poorly performing program is successful. Organization leadership wants to secure more money for the institution and preserve its relationship with the funder. Development and program personnel want to keep their jobs, which means doing what the people in charge tell them to do. The funder’s staff and board, meanwhile, want to believe both that they have designed the right kind of programs and that they have done a good job by selecting the right partners to carry them out. Pretending that the program is successful, even if it’s not, is the easiest way to keep everyone happy. It’s a dysfunctional culture that enables mediocrity and rewards effective grantsmanship over effective outcomes. I call it success disease, and sadly, the people who ultimately get hurt by it the most are a) the organization’s constituents who have to deal with subpar programming, and b) innovators who come up with better ideas but can’t get support for their implementation because of commitments already made.

Now, it should be said that plenty of funders don’t act this way. Some, like the Hewlett Foundation where I worked last summer, sincerely want to do the best job possible, and understand that that necessarily means being honest about their own failures as well as those of their grantees. But even if some funders adhere to this philosophy, their grantees have been trained too well by all of the other funders and donors who just want to feel validated in their investment. Not to mention, there’s a hell of a lot of money at stake. So instead of honesty, we get these complicated guessing games, with the funder wondering: are they telling the truth? What are the numbers hiding? What haven’t we asked them that might crack this nut? And on the grantee side, it’s: what are they really looking for? How do we measure up? What can I tell or not tell them that will make a difference? It’s all very inefficient, and does more than perhaps anything else to get in the way of long-term, productive, truly satisfying partnerships.

Think about other kinds of relationships that involve close collaboration toward shared goals. (Because they are shared, are they not?) Would this be any way to treat a trusted employee? Or a student? Even business-customer relationships are often more open and straightforward than this, in the sense that there’s usually not a whole lot of doubt about what each party is looking for. Having had experience now on both sides of these conversations, I can appreciate that promoting trust in the grantmaking process is easier said than done. With that said, here are some suggestions that any funder can use to encourage healthy relationships with their applicants and grantees.

This little list is only the beginning, I’m sure. Certainly, the little things count as well: telling applicants when they can expect to hear from you, for example, or making sure that board and staff members have a consistent understanding of eligibility requirements and review criteria so that applicants aren’t told different things at different stages of the process. A general attitude of respect is similarly essential. Issuing public requests for proposals instead of maintaining an invitation-only policy can help applicants feel that they are being judged fairly and based on objective criteria. What other strategies can build trust in a funding relationship and combat success disease? I welcome further ideas in the comments.