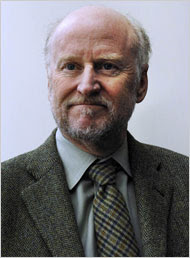 All the blogs are buzzing about it, but in case you’ve missed it:

Rocco Landesman, the Broadway producer of “Angels in America” and “The Producers” among many others, has been nominated to succeed Dana Gioia as the next chair of the National Endowment for the Arts.

I’m not personally familiar with Landesman, but the consensus so far seems to be that the choice is (a) surprising, given his background in the for-profit world of Broadway, and (b) a sign that Obama wants to shake things up at the NEA. People mostly seem hopeful to pretty excited.

For further reading, Adam Forest Huttler of Fractured Atlas fame pointed me to this op-ed by Rocco from the beginning of the decade:

It is disappointing enough that those of us in the commercial theater have long ago abdicated any purchase on sustained artistic enterprise. The idiosyncratic giants of an earlier day have given way, by and large, to syndicates of producers and corporations. Big Broadway successes are more often the product of well-crafted nostalgia brilliantly marketed than of bold and intrepid producing (”Chicago” and our own ”Smokey Joe’s Cafe” are recent examples). The road presenters poll their audiences’ response to various titles and stars before deciding on their seasons. The stakes (read costs) have simply become too high to assume undue risks. There is still a quotient of wonderfully reckless independent producers, but those careers usually don’t last long.

And now, in the nonprofit theater, too, the forces of risk control are at work. The managing directors, with their good board relationships, audience development campaigns and marketing strategies, are asserting their clout as the pressures to ”succeed” increase.

Sounds like a man who wants to shake things up to me.