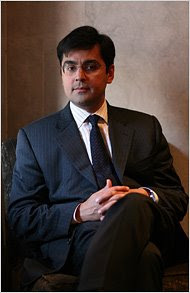 This week, the philanthropy world was abuzz with the announcement of the Ford Foundation’s new program priorities, culminating a two-year self-assessment led by new President Luis Ubiñas. Back on March 31, Ubiñas spoke at a Leaders Forum event at the Yale School of Management. I was fortunate enough to attend both that talk and a small luncheon afterwards with seven other students and the Dean of Yale SOM.

I have seen my fair share of high-profile speakers in action at my school, but this was without a doubt one of the most remarkable sessions I’ve attended. Ubiñas is a young man, still in his mid-forties, and this is his first job in the nonprofit sector. He comes to Ford after twenty years at McKinsey & Company, one of the top strategy consulting firms in the world. As he related to us during his talk, he had planned for a long time to have a “career of multiple careers” that would include a stint as leader of a large nonprofit organization, and sure enough, he left McKinsey to check that item off the list “freakishly on schedule” at age 45.

Ubiñas spoke with an extremely composed, professional demeanor that was occasionally pierced by almost shockingly direct appeals for social justice. When he talked about the murder of a gay schoolchild or the systematic undercounting of African American men in the US Census, or our country’s policies on torture, he left not a shred of doubt as to where he stood and where he thought you should stand, too. To his mind, the arts have a role to play in social justice as well; he pointed to the Foundation’s new focus on next-generation arts spaces in marginalized and immigrant communities as an example.

During the following luncheon, Ubiñas went into more detail about the new changes in program priorities. The general push was to streamline the program’s many different areas into activity under fewer, more general headings; it sounded as if the new structure will involve changes to internal processes more than actual funding patterns. He sees the program officers at the Foundation eventually moving to roles that extend beyond grantmaking, using their collective knowledge capital to convene meetings of experts, drive public conversation on issues of interest, and generally serve as think tanks of sorts for the causes that their programs address. Such roles have long been at least implicitly a part of a grantmaker’s job, but I had not heard anyone make the case for it to be as proactive and formal a commitment as Ubiñas did.

Ubiñas also talked about managing a full-time life as a rising corporate star with a family and the active volunteer commitments that prepared him for his transition to the nonprofit sector. Essentially, his explanation was that most people waste most of the free time that is available to them. You don’t have to be watching TV or nursing a hangover or talking to people you don’t like during those hours. When people think back to what they did in the past week when they weren’t working, a lot of them can’t even remember! While this is a hard line to take, it was useful for me to hear. I’ve been thinking for a while about the nature of professionalism, of coasting along with what’s expected versus going above and beyond at every opportunity. It reminded me that there is nothing preventing us from striving for excellence every moment of our lives. It doesn’t mean that we’ll always achieve it, or even that we’ll always bother. But the option is always there, waiting for us to take advantage. That was a little shot of inspiration for my day.

UPDATE: You can now view the talk in its entirety, including my question at around the 35-minute mark, at this link.