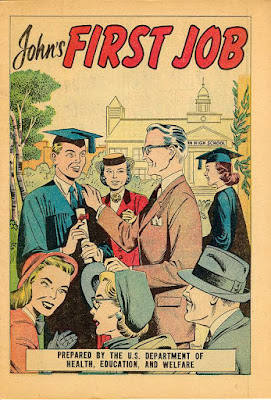 Last weekend I posted a couple of essays on compensation in the nonprofit sector which attracted a decent amount of feedback. The Cliffs Notes version, in case you don’t have time to read them, is that I don’t believe increasing executive compensation levels at large nonprofits will necessarily lead to a higher quality of leadership in the sector, because I think those who make such arguments (a) overestimate the role that salary plays in attracting the right kind of leadership talent to upper-level mission-driven jobs and (b) underestimate the possibility that less obvious candidates could perform well in such a role.

For this post, I want to talk about a closely linked issue, that of compensation at lower organizational rungs. You know, a couple of times a year I’ll read some article about how talented Generation Y kids are invading the workforce and begging for more responsibility, meatier roles, more flexible job descriptions at their organizations. When I was working out in California last summer, I attended a focus group run by Barry Hessenius on engaging youth leaders in the arts during which this became a topic of discussion (read some of Barry’s thoughts on the process here). I also subscribe to an email list called Emerging Leaders of New York Arts and have seen the issue mentioned there as well.

In light of the thirst for greater responsibility and impact that I (and apparently an entire generation of people just like me) felt in my own entry-level positions, I must say it drives me a little crazy when I read articles and see panels sounding the alarm at the coming “leadership gap” at nonprofit organizations. “Where, oh where, will the next generation of leadership come from,” these articles and panels seem to fret, “when nonprofits pay so little, and so many Baby Boomers are retiring?”

People, people. The next generation of nonprofit leadership is right under your noses. The problem is, in the vast majority of cases, they’re not being treated as future leaders. Look, the lower-level staffers at most nonprofit organizations I know of are insanely overqualified for their jobs. As a newly-minted Yale grad in 2002, I remember applying for an administrative assistant/receptionist position at a tiny performing arts production company in New York City and being told that there were 200 fellow contenders for the position. That’s a lower acceptance rate than any college, any business school, hell, any Ph.D. program out there. I sent out 140 resumes that summer before receiving a single offer of paid employment, for a part-time position at $15/hr. With those kinds of odds, you don’t think you’re getting some heavy hitters on your team? And how many more young people work at the lower levels than Boomers work at senior leadership positions? This is not a numbers issue. This is an issue of figuring out how to take advantage of a wealth of talent at your fingertips.

A true examination of how to develop youth leadership in nonprofits deserves a blog post of its own, or maybe a series of them. But no effort to develop that talent is going to go anywhere so long as nonprofits treat their new hires as cogs in a machine, rather than valued team members with their own unique package of abilities and interests. Part of that equation means paying them a salary that will allow them to live within a 30-minute commute of their workplace with fewer than three roommates and more than 100 square feet to their name. The life of the starving nonprofit employee can be interesting and romantic and fun—for about five months or so. After that, especially if your organization is in New York or San Francisco, you’re probably looking at massive turnover if you don’t start paying your entry-level employees a halfway decent wage.

Unfortunately, massive turnover is exactly what’s happening at lower levels in nonprofits all across the country. Younger, talented folks leave after two years, one year, six months, to pursue better opportunities at other firms, grad school, their own artistic careers, their own businesses, you name it. And it creates big problems for the organizations that had put in hours of time sorting through hundreds of resumes to hire them. Just because $30,000 or so may be the going rate for entry-level nonprofit employees doesn’t mean that a successful employee in that role is worth only that much to an organization! Frankly, I think that many support positions, ably filled, can be nearly as valuable as the management roles that they enable. Reliable, competent, satisfied support-level employees know the internal systems front and back, remember the ins and outs of all of the relationships, take care of the annoying busywork that management doesn’t want to (and quite possibly doesn’t know how to) deal with. When they leave, there’s a gap in services performed, services that are essential but that no one else has time or cares to do.

An incremental $5-10k a year for an employee like that makes far more difference in his or her life than the same amount of money does for an executive making four or five times as much. It builds loyalty, shows that the organization is invested in the employee’s future. Or, if the employee is perfectly happy in the support role, a higher salary bolsters against encroachment by other opportunities. So sure, start them off at the low end, but give rapid opportunities for raises, promotion, etc. Who knows? It might just ensure a smoother operation for which those high-priced executives can then happily take all the credit.