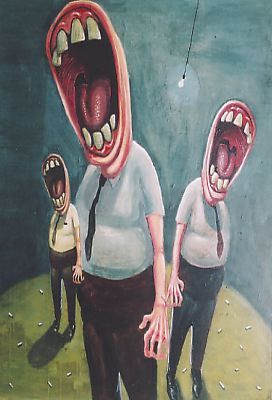 This is what Rep. Jack Kingston (R-GA) has to say about the $50 million for the NEA being included in the stimulus bill:

Representative Jack Kingston, a Georgia Republican, wants to transfer the proposed NEA funding to highway construction. He failed to get the House to vote on his proposal, so he is now trying to get on the conference committee that will determine the fate of the funding. “We have real people out of work right now and putting $50 million in the NEA and pretending that’s going to save jobs as opposed to putting $50 million in a road project is disingenuous,” Kingston said in an interview yesterday, adding the time has come to examine all of NEA’s funding.

I imagine that the artists and administrators who have recently lost their jobs or had their organizations fold from under them will be surprised to learn that neither their existence nor their newfound free time is “real.” I guess only certain industries qualify for that distinction, because, you know, arts organizations don’t actually have these things called “jobs.”

In fact, it’s Kingston who is being disingenuous here, as the stimulus bill already includes some $30 billion for highway construction, or 600 times the amount of the NEA appropriation. Adding that $50 million into the highways column would bolster that budget by a whopping 0.17%, surely enough to tip the scales from permanent destitution to prosperous recovery. Anyway, it’s not like the arts are in poor company. Big Bad Sen. Tom Coburn also wants to eliminate funding for casinos, aquariums, zoos, local parks, highway beautification, and just about everything else that’s not a tax cut. (Don’t worry, it’ll never pass.) [UPDATE: Oh yes it did.] Unfortunately, as ridiculous as these clowns are, they are succeeding in dredging up a lot of smelly old arguments about the NEA. Even some people in the arts world are getting nervous about it. The line I am reading most often these days is, “we should be funding the arts, but the arts are not stimulus.”

Let’s get a couple of things straight. The biggest misperception that conservatives are all too happy to promulgate is that spending on the arts from an economic standpoint is akin to throwing it away. Pure charity: you give them the money, it disappears, as if arts organizations were just loose collections of hippies and misfits who hang around street corners smoking pot and fingerpainting lewd images of George Bush.

Bullshit. First of all, money given to the arts does not end up in some kind of dollar bill sculpture that is subsequently burned, dumped into the Hudson River, or shot up to the moon. Arts organizations exist in the same economy as the rest of us. They buy office supplies at Staples, they break ground on new capital projects, they run profitable businesses as subsidiaries, and they PAY PEOPLE TO WORK FOR THEM. And the arts are big business — $63.1 billion according to Americans for the Arts, not counting any “induced spending” as a result of audience expenditures. There are more jobs supported by nonprofit arts organizations alone than there are lawyers, accountants, police officers, farmers, or computer programmers in the United States. Federal money that goes to arts organizations ends up in the local economy, pure and simple.

But will that money for the NEA create new jobs? That’s what stimulus is, right? Well, let’s think about it this way. Arts organizations are getting squeezed from all sides. Individual donations are drying up because of lost homes or retirement savings. Foundations are cutting back because their endowments have lost a third of their value. Arts organizations’ own endowments, which might have been contributing a significant amount to the operating budget, are tanking. Corporations? Forget it. If, indeed, 10% of arts organizations are at risk of failing as Bob Lynch estimates, that means that all of their employees could soon be out of work. All of those employees could soon be competing with the rest of the already-unemployed people in the job market, all the while collecting money from the government anyway in the form of unemployment compensation (which will cost Uncle Sam a hell of a lot more than he was paying out to their now-defunct employers). So the NEA money is not about creating jobs, it’s about saving jobs — and thus preventing the recession from getting even worse than it already is. For the purposes of helping the economy, a job saved is as good as a job created — it’s still a net positive over the alternative.

But hey, don’t take my word for it — let’s see what the Congressional Budget Office has to say about stimulus!

Households. In general, tax cuts or increases in government transfer payments increase household demand by providing consumers with additional spending power. The bigger the portion of that additional income that consumers choose to spend instead of save, the more stimulus there will be. (p. 21)

Since the CBO doesn’t directly address nonprofit organizations, we’ll have to look for what we need in a few different places. Here, the point is made that immediate spending is what generates stimulus. Fine. Arts organizations need the money now. If they get it, they will spend it right away. Much of that money will go to hired personnel, the majority of whom occupy lower income brackets and will similarly spend their money now.

Businesses. The fiscal policy mechanism generally used to stimulate business demand is to reduce the costs associated with investment in what is termed new plant and equipment. Reducing taxes on the income from new investment increases the return on investment and, therefore, firms’ willingness to make capital outlays. Increasing the after-tax income of businesses without changing the incentive for new investment typically does not induce more hiring or production because production normally depends on the ability to sell output. But increasing business income can stimulate investment or other spending by firms that have difficulty obtaining outside financing. That effect tends to be relatively more important for smaller firms than for larger ones, because smaller firms often have a harder time accessing such financing, and it is likely to be more important in the current financial crisis, when outside financing has become more limited or more expensive for many firms. (p. 21-2)

Government can’t reduce taxes on nonprofits because they aren’t taxed in the first place. However, in the grand scheme of things, even the largest arts organizations are small compared to a Fortune 500 company. And given the economic climate, I’d say arts organizations are certainly having difficulty obtaining outside financing. So increasing income seems to make sense (as would subsidizing capital investment).

Government. Another type of stimulus involves government purchases of goods and services (such as infrastructure spending). That type of spending affects demand directly because the government purchases goods and services from the private sector. The effect that such purchases have on the economy is different from the effect of transfer payments, which increase demand only when the people receiving them increase their consumption by purchasing goods and services themselves. For federal purchases, the primary issue in cost-effectiveness is the speed with which spending can be adjusted. Some kinds of expenditures can be undertaken much more rapidly than others. In general, changes that involve very large increases in outlays for particular programs or particular sectors of the economy—and especially changes that require setting up new programs or that rely on new technologies—will result in slower spending. (p. 22)

The NEA essentially purchases artistic works and services from the organizations it funds, and then makes them available to the public. Again, speed is critical. The $50 million is a small increase and requires no new technology, so it gets spent right away.

Aid to State and Local Governments. A related stimulus policy involves federal grants to state and local governments. As a transfer between governments, such a grant does not in itself increase the demand for goods and services, but it generally affects the spending and taxing decisions of the government receiving it, which in turn could stimulate the economy. The federal subsidy would increase demand if it generated an increase (or prevented a decrease) in state and local spending or if it triggered a tax reduction (or avoided a tax increase) at the state or local level. (p. 22-3)

Check. 40% of the NEA funds would go to state government arts councils, almost all of which are hemhorraging money.

Another consideration is what types of additional goods and services society would produce and enjoy the benefits of. The economist John Maynard Keynes said that hiding money in coal mines and letting private enterprises pay to dig it out would be better than doing nothing in a recession because it would give workers income they could spend on things they needed. But it clearly makes more sense to have something intrinsically desirable at the end of the day. (p. 23)

Hmm, you don’t say? You mean, things like aquariums, zoos, local parks, and highway beautification? Where have I heard this concept of intrinsic benefit before?

A wide variety of spending and tax provisions have been advocated as part of fiscal stimulus. Several considerations suggest that a combination of provisions would be most advisable. First, the timing of the stimulative effects varies among provisions. Some policy changes, such as temporary tax cuts, may provide stimulus relatively quickly but have effects that fade quickly as well. Other policy shifts, such as increases in infrastructure spending, may affect the economy only slowly but have salutary effects on demand that continue over several years. Therefore, it may be easier to rely on a mix of policies to design a stimulus package that has a relatively steady effect on the economy during the recession and fades slowly as the economy recovers. Second, many stimulus policies offer diminishing returns. For example, there may be a limited number of infrastructure projects that are ready to go in the next year, and aid to states and localities beyond some level may be used to bolster rainy-day funds or reduce borrowing, rather than leading to the increased spending or reduced taxation that feeds demand. Third, the precise stimulative effects of any individual policy changes are highly uncertain. Consequently, a mix of policies carries less uncertainty about the overall effects on the economy. Fourth, aside from their stimulative effect, various policies may have a differential impact on different groups and produce different sorts of additional output. A stimulus plan with a mix of policies may therefore spread benefits more evenly among the population and accomplish a wider variety of goals beyond stimulating the economy. (p. 23-4)

Yes, you read that right. The Congressional Budget Office itself says that a mix of strategies diversifying across a number of different groups will produce the best stimulus. Well, let me tell you: the arts are diverse, all right. In fact, we thrive in areas of both economic and ethnic diversity (pdf, p. 19). We reach a different population than just about anyone, because we’re just. that. cool.

But what about those tax cuts? Spending is nice and all, but wouldn’t we be better off just repealing taxes entirely? Not so fast, says the CBO. See this graphic: 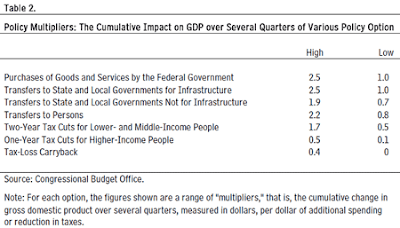 All types of spending have higher multipliers than any tax cuts. And tied for the most effective method of all, according to the graph, is the purchasing of goods and services by the federal government (i.e., direct spending).

Sounds to me like the arts are plenty freakin’ stimulating. Let’s hope Congress gets the memo.