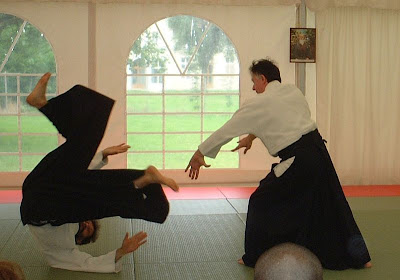 I should have known the very first weekend.

We were all gathered in a huge hockey rink in late August. As part of orientation, the school had hired a team of consultants to come in and train us in the physical embodiment of leadership—in other words, how to act (and feel) the part of a leader in your body—using techniques borrowed from dance, aikido, and other sources. We spent the better part of three days in small groups practicing a basic aikido sequence (complete with jos and everything), applying the randori concept to management practice, and doing two-steps with each other in an attempt to communicate intuitively through body language with people we didn’t know.

I’m not going to claim all of this was perfectly executed, because it wasn’t. The hockey rink was an unfortunate choice of venue for the middle of summer; the various exercises were sequenced oddly and provided with little context; the relentless focus on articulating our “commitments” felt more than a little forced for those who hadn’t figured such things out yet. Nevertheless, I remember being energized by the experience. The physical embodiment of leadership is something I’ve been thinking about ever since studying conducting during my junior year of college. Seemingly minor things like posture, stance, and mindset make a huge difference in how others perceive you and the authority they attach to your presence. The fact that the school recognized this and devoted such a significant portion of orientation to it seemed like quite a bold move to me, and it made me feel proud to be at SOM. Plus, I loved the fact that our first experience at business school was so deeply infused with the arts. Here we were, dancing, practicing yoga-esque movements, watching The Karate Kid, and it was all being integrated into the process of thinking about management. I came out of it wanting to take a class in aikido.

But the rest of my class didn’t feel the way I did. At all. By the end of the weekend, it was already open season on these consultants, and a few weeks into the semester the experiment was almost universally regarded as a disaster. The most common themes were “how does this relate to anything?” and “why are we doing this?” Anyone even the slightest bit familiar with East Asian martial arts is aware of the symbolism and life lessons associated with them, but apparently trying to draw a connection between such concepts and business was a gigantic no-no. The exercises that required us to come into physical contact with a stranger rubbed many the wrong way as well. I frequently found myself in the awkward position of having to either go along with the mocking in order to fit in, or defend the program and get blank stares in return. I felt like I was on another planet from my classmates with regard to this issue. It wasn’t going to be the last time.

As the school year wore on, I found myself running afoul of some entrenched assumptions about economics and other philosophies for how the world works. Time and again I would hear arguments treating rational self-interest as almost a philosophy of life, fitting very well with what game theory tells us about best responses and Nash equilibria (and ignoring all of psychological evidence that non-rational thinking, including altruism, plays a major role in the behavior one can expect from others). I would find myself resenting the knee-jerk hero-worship afforded to leaders of large multinational corporations simply because of the position they held. The times when I felt the most like a fish out of water, perhaps, was when discussion of the nonprofit sector—my past, present, and future—would come up. I cannot tell you how many comments I heard tying tired old stereotypes around the neck of my nonprofit sector: stereotypes of inefficiency, waste, laziness (because employees aren’t properly incentivized, you know), hopelessness (because everyone knows that a model that involves asking people for money is not sustainable), fraud, even moral turpitude. And then people would go around and share war stories at parties about sinister office politics in the banking industry and how long hours in law firms were just for show. Riiiiight. Even allowing that there are problems in the nonprofit sector, instead of thinking about how these issues could be solved, all too often it felt like people were using them as an excuse to dismiss the sector entirely, as if it had nothing to do with them. And, hello! This was all taking place in the halls of a major nonprofit institution!

So, don’t get me wrong. I learned a lot my first year of business school, and I’m grateful. It’s broadened my horizons considerably, helped put my career on the right track, given me much in the way of practical, real-world skills, and forced me to re-evaluate many of my ideas about the intrinsic value that corporations provide to society. What frustrates me is not what I haven’t learned, but what I haven’t taught. I haven’t been an effective enough advocate for the things I dearly believe to be true in class discussions, in casual conversations, in public events with guests. Yale is often lauded, and rightly so, for its strength in teaching nonprofit management relative to its peers and for its unique stated commitment to educating leaders for both business and society. It’s easy to forget, then, that even this most pious of business schools sends less than a tenth of its graduating class to the nonprofit sector every year, and that most students end up taking jobs in large, established corporations.

So my second year’s resolution is to live in my skin as a nonprofit person in business school more effectively. I am working with the Net Impact executive committee; I will try to get people to attend the Philanthropy Conference that wouldn’t otherwise; I will question and assert and communicate.

The nonprofit sector may have its problems, but its effect on my own life has been considerable. I have attended some of the finest schools in the world from 7th grade until today thanks to the financial generosity of others, opportunities that never would have been available to me had market forces had their way. I was able to receive performances of my own creative work and produce a recording for my band because of grants from government, private, and individual sources. And now, I will be able to pursue the career I want instead of a career of convenience because of SOM’s Loan Forgiveness Program. Maybe some equation in a book says that I would be more valuable to society if I were some drone working for Goldman Sachs, but I know it’s not true. And, in a way, I have my first year of business school to thank for that.