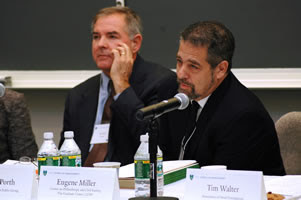 The first half of this wrap-up is available here.

Following the Funder/Grantee Relationships panel, I attended another discussion focusing on the democratization of philanthropy (i.e., bringing more and more types of donors to the funding table). The panelists were Diane Airker and Angel Fernandez-Chavero from the Community Foundation of Greater New Haven, Eugene Miller from the Center on Philanthropy and Civil Society at the CUNY Graduate Center, Richard Porth from the Hartford Foundation for Public Giving, and Tim Walter from the Association of Small Foundations. Cheryl Casciani from the Baltimore Community Foundation moderated. I didn’t take as detailed notes for this one, so I will just pass along a few memorable tidbits that caught my attention. 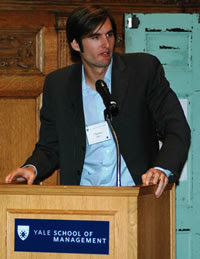 Following this second panel, we broke for lunch and listened to the keynote speech by Charles Best, CEO of DonorsChoose and a 1998 graduate of Yale College. Looking like the California surf had dropped him on our doorstep, Best gave an engaging presentation about his organization and the creative ways it has interacted with donors and corporations alike. DonorsChoose acts as something of a clearinghouse for small-dollar classroom projects in public schools across America, kind of like a more focused version of what Fractured Atlas does as fiscal sponsor for fledgling arts organizations. The projects are submitted by teachers and vetted by the organization. Apparently the best part is the personalized thank-yous you receive at the end. What’s more, you can buy gift certificates for your favorite budding philanthropist. All in all, an interesting model that bears further study.

The final event I attended was the Trends in Corporate Giving panel with Joseph Gianni from Bank of America, Greg Johnson from the Sports Philanthropy Project, Celina Miranda from the Bank of New York Mellon, and William Shutkin from the Innovation Network for Communities. Jack Meyers from Yale SOM moderated. This panel was perhaps the most wide-ranging of the three I attended, as much of it featured highly philosophical debate about the very nature of corporate responsibility to society. Shutkin, in particular, advocated a very specific vision of his in which private philanthropy in some sense would no longer become necessary because corporations became committed to social responsibility in their day-to-day operations. After all, corporate giving accounts for 31% of all foundation giving, which if the statistic from the previous panel is true means that it makes up less than one-tenth of one percent of the annual GDP. By working social responsibility into the fabric of major for-profit operations, a scale perhaps can be achieved that would be unattainable otherwise. This point of view was echoed by a questioner who opined that it would be better if corporations sought to avoid causing problems in the first place rather than trying to “fix” them after the fact through their philanthropic arms. Some aspects of this vision are already entering the marketplace on a small scale: for-benefit corporations with hybrid/integrated solutions that use markets for social ends–the so-called “double bottom line” approach. Shutkin also mentioned “mission investing,” the process of nonprofits using their own endowments as a means to funnel resources to socially responsible ventures. The discussion was fascinating, but difficult to grapple with fully in the time available.

Since this blog is ostensibly about the arts, I’ll quickly mention that Bank of New York Mellon delivers substantial support to the arts in NYC, although not so much (as yet) in Boston, where Celina Miranda is based. Miranda had an interesting perspective as someone who came to corporate philanthropy from social work. It seems like an appropriate track, frankly.

Overall, the Philanthropy Conference was excellent and I’m glad to be able to report on it here. Here’s hoping it’s an SOM tradition that persists for many more years.

Thanks to Jeff Levi for the use of his photos from the conference.