To view the rest of this series, click here.

For years, artists have complained about the National Endowment for the Arts’s 1996 decision, under pressure from Congress, to eliminate individual artist fellowships (except for literature). Nevertheless, it seems that a number of local and private arts agencies and foundations have instituted programs in the past 25 years that support artists in their work directly. Many of the more high-profile of these, including the MacArthur “Genius” grants, the United States Artists fellowships, and prizes such as Columbia’s William Schuman Award, essentially function as general operating support grants for individuals, with no particular deliverables expectation and a closed selection process that operates via nomination.

In the previous segment of this series, I argued that giving more grants to smaller organizations helps to diversify the risk of giving to any one organization while broadening the effect of the money distributed. There’s another factor to consider as well. Because the bulk of foundation and government resources goes to organizations that boast not only the largest artistic budgets but also the greatest market share, there’s a steep stratification within the artist community between elements that are subsidized by outside funding and thus pay “professional” rates for artists’ services, and elements that exist outside of that infrastructure that rely on largely volunteer or far-below-minimum-wage labor in order to get by. Essentially, what this means is that some artists are able to live reasonable or even comfortable lives making art for a living, while other artists of equivalent ability get bupkus. There is little resembling an artistic “middle class” whose members receive remuneration for their services that is respectable, yet not out of proportion with the direct economic value that they generate.

Funding artists directly has the potential to exacerbate this problem. First of all, the growth of artistic stature is spiral in nature: the more citations, awards, and high-profile work you already have, the more you are likely to receive in the future. That momentum makes an artist more visible to funding organizations whose expertise is more usually characterized by a broad understanding of the field rather than an encyclopedic knowledge of thousands of people working in relative obscurity. As a result, awards that fund artists directly, particularly those that do not function via an open call process, tend to go toward individuals who are already doing better, both reputationally and financially, than their peers. In the worst case, it increases the stratification already present in the field on a basis that has more to do with hearsay than intrinsic artistic merit.

I don’t think it’s incumbent upon foundations to judge artistic merit. There are plenty of other people in this world who are perfectly capable of doing that, and arguably more qualified: curators, journalists, other artists, audience members themselves. Where foundations can add value instead is in setting up and supporting systems by which artistic activity is generated in their communities.

How might this be accomplished? The first place I would look is what I would call nexuses for art. Where is art shown, produced, performed, bought, sold, consumed, marketed, supported? It’s not just the museums and the concert halls. It’s the dive bars, the galleries, the coffee shops, the off-off-Broadway theaters, the bookstores, the record stores, the radio stations, and the occasional entities that serve as all of these things and more. Finding a way to get money to these organizations is tricky because many of them are set up as for-profit entities. Yet, from the artists’ perspective, many of these tiny businesses fulfill just as important a function as the city’s performing arts center or marquee theater company, despite being labors of love for their proprietors that often operate completely outside of the support structures that exist to make art available to a wider public. 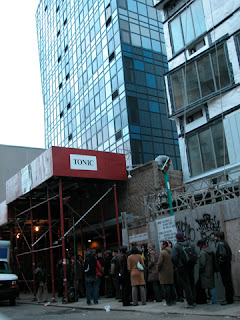 The artists, in some ways, are only the end product of this multifaceted ecology of organizations. A company that receives no donations, yet values artistic mission over profit, is a company in a precarious position, completely exposed to market pressures. Any time one of these organizations fails, untold numbers of artists (not to mention audiences and communities) are negatively affected. My electric chamber ensemble, Capital M, had the honor of playing one of the last shows ever at the legendary experimental music venue Tonic. The ten-year-old for-profit club, which two years earlier had raised more than $100,000 from fans and angel donors to avert another financial crisis, was only the latest in a string of music venues to close or relocate in the face of enormous pressure from the New York City real estate market. Its demise inspired Take It to the Bridge to organize a protest outside the venue and gather signatures demanding that the city provide musicians with an equivalent replacement. In my opinion, support of these kinds of organizations is an oft-overlooked but critically important way to bolster the livelihood of a varied and active artistic community in a local area, with all the attendant benefits that such activity provides.